In the August 25th announcement at the New York Public Library, Sony unveiled its new Sony Readers and new services.

One of the new services enhanced a feature already in existence, the ability to get a public library e-book onto the Sony Reader.
Everything will be centralized on the Sony E-book store and a patron would enter their zip code to find a local library, then their library card number and pin to download.

I'm wondering if they are going to provide wireless access to this process through their new wireless reader coming out in December. If they do that, they will allow access to most of the world's past and current literature into one device. You could get a classic from Manybooks.net or Google Books, OR you can get something more current and diverse from your local public library. Access it all from a single device. It would definitely dwarf the Kindle in selection.

My big beef with the Amazon Kindle was that it wasn't easy to put free content on it. The most voracious readers need to supplement their reading with free books. That's one of the main reasons public libraries were created. The Amazon Kindle's appeal is that you can get any book you want (well almost) immediately (of course now we know it can just as easily taken away). 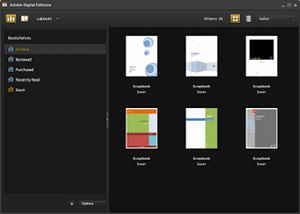 The Sony Reader took a different approach starting in July 2008. It decided to open up its content so that any book can be easily added to it. Sony Reader has taken this a step further by providing library content through Overdrive. Using Adobe Digital Editions and Overdrive, any library patron can go to their library's webpage, check out a book, download it to their computer and drag and drop it into their Sony Reader. Voila, you have free reading material. In my opinion, it's actually easier than getting an audiobook from Overdrive, and faster.

I am really excited about this announcement and possibility. I don't see brick and mortar libraries going away anytime soon, nor will e-books replace print. However, I see this as a way libraries can supplement their services to a new digital savvy population. Furthermore, we can provide access to any book in the known world by having this content online and having the ability to check out Sony Readers. The potential is very exciting.

If you would like to see a sample, you can watch the below video on how to check out a book from Overdrive to your Sony Reader. (Also note, standard check-out is three weeks, however, you can change the date on your Sony Reader. If you need more time, just back date a few days, weeks, or a year so that you can finish the book. It's like your own renewal process)

Articles about the Sony Reader announcement with quotes:

Sony Trumps Amazon With E-book Reader - Business Center - PC World
Here's how it works: Check the book out online and on the due date the book simply expires from your reader. When e-readers are popularly-priced, this feature could make public libraries much more relevant to modern reader's needs, though publishers' licensing restrictions could become an issue.
Sony Plans to Unveil E-Book Reader to Rival the Kindle - Science News
Sony also announced Tuesday that the Readers will be able to load e-books "loaned" from local libraries. A library card will provide access to free books that expire after 21 days. The library connection "would seem to be something Amazon would never embrace, so that could be a key differentiator," said Richard Doherty, director of research firm The Envisioneering Group.
Sony to link Readers with libraries, allow e-book borrowing - Ars Technica
That "anywhere" will apparently include libraries. According to Sony's Haber, the new version of its online book store will allow users to enter their ZIP code and determine whether the local library offers electronic versions of its books. These books can be downloaded, at which point they'll have a 21-day expiration date—no late fees, as Haber was happy to point out. The New York Public Library's representative announced that his organization would be taking part in the service. That's a rather significant announcement, given that he said that the NYPL's website was the second-most visited online library, behind only the Library of Congress.
Wireless reader with seven-inch screen: A TeleRead report from Sony’s news conference in New York | TeleRead: Bring the E-Books
What is clear, however, is that Sony is maintaining its commitment to the ebook market. Not only with new devices, but with its connection to libraries. This is an area where they are far ahead of the Kindle and the connection with the New York Public Library certainly gives them credibility.

One thing I've noticed at my current job is how often the media really highlights our local library. I was invited to go on the local Fresno channel Fox 26 for their Great Day morning show. They were highlighting ways to get ready to go back to school. I've been on tv before highlighting library services (I talk more at length about that experience here). However, this was the first time I was in the studio. I'm on to talk about the library's tutor.com service. Here is the video. (You will have to endure a brief commercial for the embed.)