A Future of Reading: The Barnes and Noble Nook Check-out Project 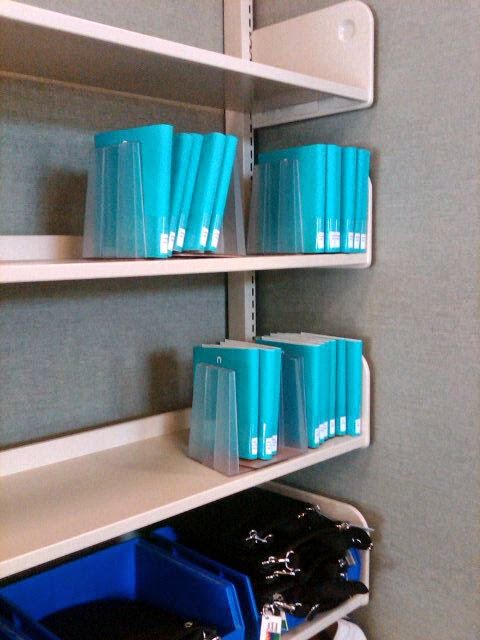 We recently launched an e-reader project at our library with great success. Barnes and Noble currently has a program that offers support for libraries thinking about circulating Nooks. I wasn’t aware of this project until last Fall during the California Library Association Conference, at which time I was approached by a Barnes and Noble representative about the program.

I first learned about the Sacramento Public Library’s Nook project as part of the "Great in the State" presentation highlighting ideas that libraries could adopt. I was part of the panel there discussing our "Job in a Box" project and book machines. They were circulating the Barnes and Noble Nook to patrons, pre-loaded with books.

Over the past several years, libraries have experimented with checking out e-readers, so the concept itself isn’t new, but having the blessing of the organization certainly is. I remember the “wink, wink” approach from other vendors suggesting that libraries could do that and they won’t say anything, but they won’t offer support.

A surprising aspect of Sacramento's presentation was that they brought their own Barnes and Noble representative and she worked with them every step of the way on their project. I was even more surprised to discover that the rep was looking for me at the conference.

We aren’t the wealthiest of libraries, but we do have a very healthy and robust e-book collection. Through her research, the rep found that we had the most e-books per capita, per expenditure in the state of California. In short, even though we didn’t have a lot of money, we still thought e-books were important. And they certainly are. Since the e-reader Christmas of 2010, the demand for e-books in libraries has sky-rocketed. We only launched our collection in June of 2011, but the demand was already there. Heavy promotion of our collection, as well as the Kindle compatibility announcement from Overdrive, led to a significant financial contribution to expand our collection. We are in tune with community demand and therefore, we were in a perfect position to take the next step.

has done an excellent job promoting its program. I saw them at CLA, the Edgy Librarian, and more than a few webinars. They have also done an extensive job documenting their project (http://www.saclibrary.org/?pageId=1465) For a library with our resources, we planned to do the stripped down version.

We purchased 30 Simple Nook Touches at around $100 each. We also purchased the Nook satchels that Barnes and Noble sells. The complete check-out kit includes: the Nook, a cover for the Nook, a usb cord, power connection, instructions, all placed in the satchel.

The rules for transferring titles to devices is six devices per book. Therefore, we performed the math- 30 Nooks, five genres, six books per Nook. We distributed the project among the collection development librarians responsible for the genre including:  fiction bestsellers, non-fiction bestsellers, romance, mystery, and young adult. The books would have a normal check-out rate with late fee charges and replacement charges consistent with how we check-out similar materials. Those who check-out the Nooks must sign a form stating that they will accept the replacement charge if they break, damage, or lose the device and any of the parts. The project in general cost around $4,000 to run with 30 Nooks.

We plan to expand the program based on its recent success. We also received heavy press attention for the venture. The local ABC News covered the program and we received great coverage in the local paper:

The Nooks are coming to Tulare County Library
http://www.visaliatimesdelta.com/article/20120516/ENTERTAINMENT06/205190308/1040/ENTERTAINMENT 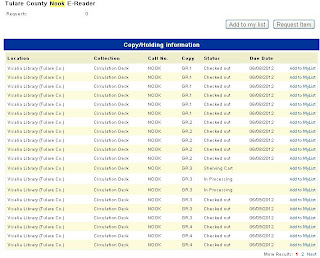 The extensive coverage resulted in all of the Nooks being checked out in the first two days of the program. We announced the open-house program to check-out Nooks for Friday at 2PM. We actually had people lined up as soon as we opened at noon, waiting to get one of our new Nooks! In the first five minutes, all of our Fiction Bestsellers were checked-out and most of our Non-fiction. Saturday morning, all the Nooks were checked-out, a marvelous success. Our next steps will be an assessment from patrons to see if they liked the format, the titles, and how we can improve the program. The general idea for this kind of program is to introduce our community to the future of reading. They have the opportunity to look at the device and see how it works. It also helps us promote our Overdrive e-book service. In utilizing a relatively cheap and easy to use device, a patron can have access to their reading material 24/7, all provided by their local library!
Posted by jdscott50 at 4:08 PM No comments: 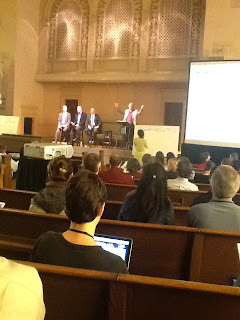 Digital Public Library of America is a vast program attempting to encompass everything from rare archival information to the modern best sellers- all through a single interface that will enfold all human knowledge. A rather ambitious endeavor. A great deal of this is born out of the wreckage of the Google Digitization project that was shut down by the courts due to copyright issues. In order to restart the program, the steering committee is rebooting the program on its own.

There is a good overview of what they want to do in the LA Times Opinion Page:

The plan is to include everything, even the obscure paper that existed for a few years in a tiny rural community- a problem of unique, but obscure content. Negotiating the copyright to include the big newspapers, as well as modern popular authors, is a legal hurdle.

I was generally heartened about the support for rural libraries. A big problem that I see is that we are not moving fast enough. A lot of private companies want to digitize library content (especially newspapers), with quick and dirty techniques. Using simple OCR techniques is not enough; the text can be found, but the context is lost. We need the metadata and that is what Harvard just recently released.

Coordination strategy is important, but formal process even at the state level is too slow. They don't have the staff or the funds, and neither do local libraries. If we don't get the funds and the staff then how are we going to digitize anything?

If this gets off the ground, we would really have an accurate view of cultural content. Look up a topic and find everything- from web pages and images, to books, archival newspapers, and oral histories. Research that encompasses everything in one search, rather than using different websites for each type of research.

Digitize older books or negotiate for books in copyright; both take time and money. Which one will take priority? New books are sexier, but history is just as essential.

Program had a tough time with the ebook lending aspect. What is available and how is it getting distributed? We do need to get ahead as an organization, otherwise a private group will develop one and we will again be a bottom priority. We need movement on this issue. 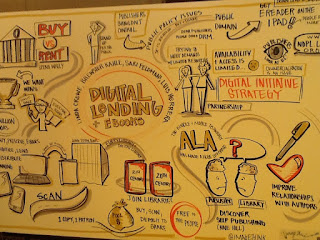 This ambitious program faces the chasm and the wall. There is a chasm that represents the lack of digitization of archival materials. Libraries all across the country have such rich cultural collections that need to be scanned and preserved, but there isn't the funds, staff, or equipment to make it happen. There is a wall that represents the big publishers and authors. If we cannot gain the rights for distribution of this content, then not only will this project stall, but it places libraries in jeopardy. There is obviously a lot at stake here. It is an encouraging project despite these facts. DPLA is on the right track and with the right moves it can unleash the kind of service libraries have only dreamed about.