Sony adds nothing new to Reader for libraries 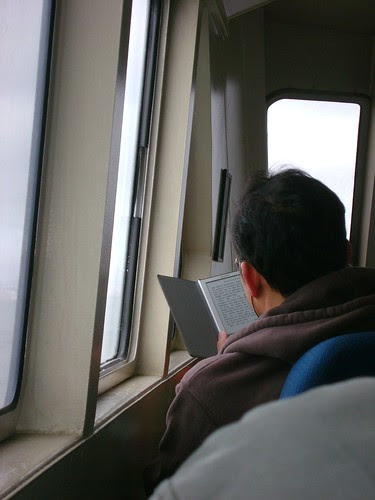 I was disappointed that Sony's August 26th announcement didn't add more to libraries. In my previous post, I thought that Sony presenting at the New York Public Library would indicate improved performance and potential for new services at public libraries. That doesn't seem to be the case. Anything Sony has done for libraries has already been accomplished over a year ago. There's nothing new except one link.

A Link and Nothing More

If you go into the Sony Reader Ebook software, there is now a link to search public library ebooks. I entered my zip code and found the closest library that had Overdrive books. Thus, I was presented with two problems with this set-up. The site link goes to an Internet browser to the library instead of going inside the Sony E-book software. It's great promotion for libraries (that provide the service), but it isn't inside the e-book software to make the search and download process easier to use. It's just a link, nothing more. (photo by


Libraries have audiobooks, not as many e-books
The second part was that not that many libraries provide Overdrive, and of those, most provide audiobooks, not e-books. Which bring up this Teleread Post: E-books from public libraries? Not from MINE. Only audiobooks available

Why is this? Mostly because when those libraries began experimenting with services like Overdrive, they found that anyone could download an audiobook to any device. A cheapie from the corner drug store could suffice to open up a world of audiobooks. At first, Ipod users weren't able to, but in the last few months, they even have access. It's the best return on investment.

E-books have always been a tricky thing for Overdrive. At first, the only device the e-book would work on would be a windows Smartphone, but not much else. I lamented this fact in a Teleread post. Six months after I posted that, a Sony Reader upgrade enabled the device to download Overdrive E-books. It was great, I can get anything I wanted onto a device that is great for reading e-books. However, all the announcement from August 26th was a repeat of the fact that they could do that. It took a year for them to announce that? It was curious that they didn't push that after the upgrade. I still can't find much about it.

Just another locked service
So even though Sony is going far farther than others to provide the public with free reading material, they aren't going very far. They are late in the announcement of the compatbility with Overdrive. This affects libraries providing services. We wouldn't purchase and provide something there is no interest in. Often, we have to piggyback our marketing onto others so that we can promote what we provide. If Sony was pushing this, we would have received more demand, instead, we have a bunch of Sony Readers users wondering why more libraries don't provide e-books, but just audiobook downloads. Leading to further frustrate users, again from Teleread (Overdrive offers wireless download application) they announced that Overdrive was offering a downloadable software where you can download Overdrive titles right to your phone...except that it was only for audiobooks not for e-books, and just for windows, not iphone or symbian or android.


Save the Time of the Reader
From my librarian's perspective, what I would like to see is a way to provide free current reading material to the public. Libraries have traditionally provided this beyond any private or group of users. I have a budget to provide books to my community. I could pay for a subscription to something like Overdrive, provide free books online as I do inside our building.

What I would love to do is to be able to pay for a service for patrons to be able to download a program onto their device (cell phone, reader, whatever) and be able to download whatever they want right there. Overdrive seems to be developing it, but at an extremely slow pace. Any slower and they risk being irrelevant as a choice. I would even like to see Overdrive to be able to work inside the Stanza App for the Iphone/Ipod Touch. This is the kind of direction we should be going in. There are so many mobile devices out there, people should be able have access to reading materials that can stimulate, innovate, and please at their fingertips for free. We need to have the digital version of what libraries are already providing.