The situation now for California Libraries

There are several California Propositions that will determine the state's budget for the next year.

I'm too new to this situation to provide any meaningful analysis. This is the best snippet: 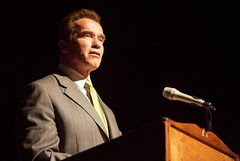 "Voter approval of the May 19 measures is needed to complete implementation of the budget Mr. Schwarzenegger signed in February to close a then-$42 billion deficit through July 2010. The budget calls for steep spending cuts and new taxes. Among other things, the ballot measures would impose a spending cap on lawmakers, let the state borrow against future lottery revenue, and divert to the general fund some money voters had earmarked for mental-health and children's programs."

All I do know is that if these propositions fail on May 19th, which seems likely, the state may "borrow" local property taxes.

"The possibilities include cutting $3.6 billion from education, reducing the state's firefighting budget by 10%, and releasing 40,000 low-risk inmates to cut prison costs, Mr. Schwarzenegger said. The state also may have to borrow $2 billion from local governments, he said.

Some would be skeptical about "borrowing".

"The proposal would cost Concord about $2.24 million, said City Manager Dan Keen — money the city can ill afford to lose.

"It may be an effort to influence the election upcoming," Keen said. "But if the election fails, we are concerned that the state will have few options, and, given their record in the past, that they will try to come after cities."

Keen is skeptical about the state repaying any money it borrows.

"Their track record isn't very good. We're still waiting on repayment of some loans back in 1993 to redevelopment agencies," Keen said."

This move would cut 8% from local government spending. Many libraries are already facing severe budget cuts from the bad economy.

Library directors vote not to close branches - for now

"On a 6-3 vote, the Santa Cruz Public Libraries' Joint Powers Board on Tuesday asked acting Director Susan Elgin to return with variations on a theme -- how to trim about $1.3 million from the libraries' current $12.6 million budget without closing any of the system's 10 branches."

"The Santa Cruz Public Libraries' Joint Powers Board must by July 1 figure out how to balance its $11.4 million budget with an estimated $2.4 million less in sales and property tax revenues than at this time in 2008. The board oversees all libraries in the county except those in Watsonville."

Dwindling sales taxes and falling property values are impacting county and city systems. With the threat of the propositions failing and the state "borrowing" from local property taxes, that could be the nail in the coffin for many libraries.

It's sad to say that when the economy dips, essential services like public libraries get hit hardest. It's ironic that libraries are getting such heavy use, but can often be the first to receive the axe in a bad economy when they are often critical in helping provide workforce development and job training.

"A half dozen libraries across Tennessee are receiving grant funds administered through the Secretary of State’s office for programs that help job-seekers find work. 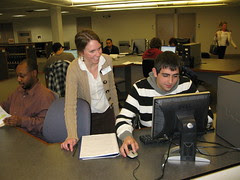 Things are tough out there and librarians are very resilient. They are critical to our economic recovery. We will persevere and come out anew during these tough circumstances as always. There always seems to be doom and gloom these days, but libraries are still providing the critical services our public needs both now and for the future.