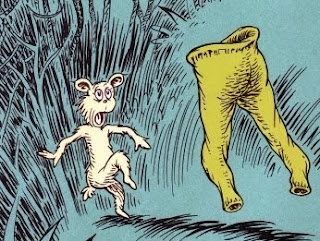 Roy Tennant has a post about 10 things library administrators should know about technology. This was a precursor to an event that happened this Fall at the Digital Library Federation Forum. This post went around the circles with little comment other than re-posting. I didn't find this list very helpful as an administrator. The discussion in libraries shouldn't be "don't be afraid of technology", but "don't be afraid of change." The implementation of that change and the removal of that fear are the keys to success.

From my perspective, I don’t view these types of decisions that Roy brings up as technology decisions. I am sure there are some who say no to technology, but those administrators often say no to everything. Technology is just another tool to use and an administrator weighs whether he can use the tool or not. It's not an either or situation.

Using Tools to Make Connections
Library administration should keep up with current trends so that when staff members come up with ideas, they understand where those ideas are coming from. It will lead to a faster implementation, another way to accomplish the idea, or if the idea will work.

I enjoyed the re-post from the M Word, Marketing Libraries blog for five skills that drive innovation:
SNIP
Associating: The ability to connect seemingly unrelated questions, problems or ideas from different fields.

Questioning: Innovators constantly ask questions that challenge the common wisdom. They ask "why?", "why not?" and "what if?"

Networking: innovators go out of their way to meet people with different ideas and perspectives.
END SNIP

I always remember when I went in for a demo on a product. It was for Vocera. He was demonstrating the product and talking about the things it can do. I remember constantly scribbling in my notebook while he was speaking, even when he was not speaking. My staff asked me if we were supposed to take notes and what was I writing. Even the demonstrator asked. I told them that while he was speaking I was making connections to all the potential for this device. All the things we needed for our library beyond what he was talking about. I think most librarians should be doing this during a product demonstration, but then ferret out what would actually be needed from the product, or if the product is needed at all.

I am not sure Roy's list is very helpful, but for a few points. Technology is getting cheaper and easier, true. It’s relative though. If you have a tight budget and staff uncomfortable with using the tool, or even if the tool will be useful, those weigh into the decision. There is also the danger of having no direction for new services, technology or otherwise. Is this right for the community? I also enjoyed the feature creep discussion here and here. Having new services and technology without rhyme or reason is dangerous for budgets and for staff.

Don't Drown Your Horse
I see the entire list as a re-hash of concepts that have been used before and can be applied to a general view. Don’t be afraid of failure, don’t try to be perfect, are commonly used. However, some of the examples such as "technology gets easier over time" is fine, but the example of installing Unix seems a bit off. That isn't a good example if this article is directed at administrators.

Another piece would be staff buy-in. We can say "don’t be afraid of failure", but when it fails, staff can get pretty frustrated, even angry. Furthermore, without buy-in it just looks like you are shoving things down their throats. Drowning the horse in trying to make him drink.

I don't think administrators are saying no to projects because they involve technology. They say no to projects that they don't understand or aren't sure they have the resources for, staff or otherwise. Those trying to implement or attempting to convince others to implement must have a clear vision of what is to be accomplished and tell a compelling story.

"In dealing with new ventures, particularly in dealing with technology, you should find ways to mitigate risk, but not eliminate it. New ideas and decisions involve risks, there is no way around it. Knowing what to do when things go wrong is more important than making something foolproof."

Know the organization well enough to understand the impact of the decision.
From Giuliani's Leadership:

"Knowing the small details of a large system leaves a leader open to charges of micromanaging. But understanding how something works is not only a leader's responsibility; it also makes him or her better able to let people do their jobs. If they don't have to explain the basics of what they need and why they need it every time they request more funds or different resources, then they are freer to pursue strategies beyond simply spending what they're given."

Don't abuse tech staff just because they know about technology. There is too much mythology behind those that can get things done. They work hard and love what they do, but they aren't magicians.

We need to move these conversations into conversations about change and not conversations about technology. Everything libraries do is about technology and what kind of service to roll-out is all tied together. It may put them on the cutting edge or the bleeding edge, it may put them on par with everyone else, or they can say it isn't right for them. The choice is made locally for that community. It shouldn't be implemented simply because someone else is doing it; it must be proven locally. Understanding the service to add or to change, knowing its impact on the library and staff, and understanding the return on investment are key pieces. A library needs to decide whether it is worth it to them.

Thanks for the link. Nice post, there are definitely a lot of things to consider in technology implementation. It's not easy.

I like the way you refocused the question away from technology to attitudes about change. That really is the crux. I think the "10 Things" list is targeting an old school administrator who still hasn't quite gotten it. A neighboring library system recently sent out a list serve request asking other libraries for input as they created a taskforce (yes, a taskforce) to explore whether they should have a facebook or twitter page. Instead of waiting until it appears the technology boat is about to leave us behind and then acting, library administrators need to be listening and learning about what the future holds for not only libraries, but also business, technology, nonprofit fundraising, etc. Not so that we can jump on each and every bandwagon that comes along, but so that we can be writing mental notes to ourselves about how these things may connect with the mission of our library.

Helpful stuff to think through - thanks!

Thank you for the comments. There are plenty of people looking at new things with old approaches. The facebook example is pretty funny. (unfortunately, sometimes it is local government that can block something so small.)

There has to be a balance and most importantly trust. We do have to be more nimble when it comes to technology projects as technology is ever changing, and quickly.