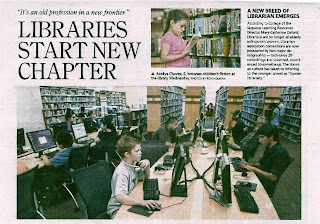 A couple of months ago the Visalia Times-Delta featured a great article on our libraries. Unfortunately, it is no longer available on the newspaper's online archive. However, I am currently including it in a project, and have uploaded the article as it appeared in the newspaper, as well as the full text document.

Excerpts from the article:

"It's an old profession in a new frontier."

For better or for worse, the 21st century has brought a new level of connectivity, accessibility and flexibility when it comes to the gathering, altering and distributing of information, art and ideas. This new information age has contributed greatly to the evolution of the traditional library. Once the guardian of information, libraries are changing, becoming hubs outfitted to organize and redistribute the world's vast wealth of online resources in the formats that are most compatible with its communities' needs and desires.

In Tulare County, librarians have been charged with the task of meeting the needs and desires of several groups of people‚ children who read traditional books but who are also technologically inclined, teens and young adults who consume much of what they read on a mobile device, and older adults, who could be either completely faithful to traditional printed media, or eager learners of their children's and grandchildren's gadgets. But the strategy for staying relevant goes beyond simply adding technology. There has been a concerted effort on the part of our public libraries to re-brand themselves as not only information centers, but also community centers‚ places where learning is social.

A tech-driven tomorrow begins in Visalia today
While community engagement is an integral part of the Tulare County Library's plan for the future, the transition to the library of tomorrow is very much technology-driven. During the fiscal year that ended June 30, the Tulare County Library checked out 20,000 ebooks. While 20,000 checkouts constitutes only about 3.5 percent of total library transactions, it becomes significant given the fact that there were zero e-books being checked out four years ago. Today, Tulare County is invested in three digital library services, the largest being OverDrive, which houses most of Visalia's digital collection.

"December 2010 was the e-reader Christmas," County Librarian Jeff Scott said. "We got OverDrive because it was the tipping point for e-books. It was either get them or get left behind." Getting left behind in the digital age is precisely what Scott says will not happen in Tulare County. Patrons of electronic reading material have a considerable selection from which to choose here. The Tulare County Library boasts more than 32,000 digital titles‚ a number that Scott says is larger than that of libraries in comparable markets elsewhere. "We have a Fresno-sized collection in a Visalia-sized market," Scott said.

In addition to catering to clients who already own and operate their own e-reader devices, Tulare County Library is taking an active role in introducing the latest in electronic reading technology, whether it be Nooks, laptops or tablet computers, to library card holders. Grants have enabled the library to begin loaning out Nooks, which are preloaded with bestsellers and other requests, for guests to take home. The opportunity to participate in workshops and use a mobile device free of charge has helped to spread awareness and increase the library's clients' proficiency with technology, many clients wind up purchasing or being given some kind of mobile reading device as a gift. With older adults who already frequent the library going digital and younger e-reading adults returning to the library for the first time since childhood, the result is an ever-increasing digitalonly clientele that is checking out more and more electronic media every year.

But what does the new media cost? Does it cut into the print budget? Right now, about 20 percent of the $500,000 annual collection development budget is spent on ebooks, leaving 80 percent to traditional print books, according to Scott. In addition, the digital collection has benefited greatly from donations from the Friends of the Library and Tulare County Library Foundation, as well as private donations from individuals totaling $200,000.

How far does a digital dollar go compared to a print dollar in terms of buying new material? Are gadgets making books harder to come by? How far a digital dollar goes is hard to pinpoint, Scott said. To purchase a digital copy of an old novel is pretty inexpensive. And the upside of a digital copy is that even if the initial cost is more than that of a hard copy, it has a limitless shelf life. There are no pages to tear, no binding to come unglued, and thus, no replacement copies ever needed.

The situation is different, however, when it comes to purchasing the latest bestsellers. Each of the big six publishing houses have different, and ever-changing, rules about library usage rights. A digital copy of a bestseller, which may cost $75, is still a good deal if it never has to be replaced. After all, by the time the library purchases several replacement copies of a heavily used bestseller that sells for $15 apiece, it about breaks even.

But the drawback is that the exorbitant initial investment in an online book does not help with short-term high demand. An electronic book can only be viewed on one device at a time. So while it may have good long-term value, the cost of purchasing several digital copies of a popular item all at once is astronomical.

New gadgets are not just for reading.
Thanks to grants, teens who participate in the awardwinning TCL Teens program will have the opportunity beginning in the fall to check out iPad Minis for the purpose of creating their own personal documentaries with a "Day in the Life of..." theme. The kids will then be trained to edit their footage into a short film. Gunner Santos, 15, a student at Mt. Whitney High School, is an eager participant in the TCL Teens program. "It sounds really fun, showing people what I do," Santos said of the documentary program. "I'm really excited about that."