From Awareness to Funding Part I

I have been waiting to review this document for a while. From Awareness to Funding is an OCLC report that surveys who supports libraries and why. It also surveys why people don't support libraries and why. I enjoy getting information on how the public perceives and uses the library. We went through a similar process when we developed our 20 year master plan and our bond referendum. Both identified key issues for the library and helped us pass our bond.


Some of the points in the document provide keen insight to why referendums and levy votes fail. Some of the points I don't agree with as I see them as points very difficult to convey, such as explaining where the library gets its money. Some financial analysts cannot clearly decipher and explain the complexities of the local taxing system. It is difficult to do that without appearing too obfuscate. The density of the annual report is enough to scare anyone away.


Some highlights for now:


YES!!! This is where my library is right now. We have huge increase in demand, but we are very slow to catch up to it.

"Our hypothesis:U.S. public libraries are facing marketing and advocacy challenges that have been faced by other ‘super brands.’ Lessons learned and successes achieved can be applied to increase library funding. Utilizing marketing and advocacy techniques targeted to the right community segments with the right messages and community programs, we can improve the state of public library funding."

There were eight important findings derived from the quantitative research:


1. Most people claim they would support the library at the ballot box—fewer are firmly committed to it.


2. There is a lot that people don’t know about their public library.


3. Library support is only marginally related to visitation. Advocating for library support to library users focuses effort and energy on the wrong target group.


4. Perceptions of the librarian are highly related to support. ‘Passionate librarians’who are involved in the community make a difference.


5. The library occupies a very clear position in people’s minds as a provider of practical answers and information. This is a very crowded space, and to remain relevant in today’s information landscape, repositioning will be required.


6. Belief that the library is a transformational force in people’s lives is directly related to their level of funding support.


7. Increasing support for libraries may not necessarily mean a trade-off of financial support for other public services.

"Respondents who have the strongest beliefs that the library is a source of transformation are those who are most passionate about the need to protect, support and fund the library." (p 25)

"Instead, the research indicated a need to appeal to both the heart and mind of the potential voter, positioning the library as an important part of the community’s infrastructure that plays a key role in providing equal access to resources vital for thriving in today’s digital world. (p25 "
Overall, I have marketed the library and advocated for the library. We are embedded in the community, people see our value.The friends group makes $25,000 that goes right into library projects. We passed a bond by 66%. However, the traffic exceeds the funding right now. It always will in government. I wonder what the breaking point is.

I liked the breakdown in this pyramid for library support: 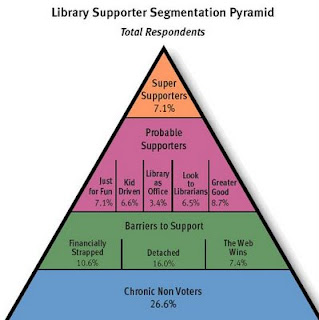 FINANCIALLY STRAPPED
"The Financially Strapped generally believe that the public library already has sufficient funding. The Financially Strapped segment is more than twice as likely(53%) as the average for all voting respondents (23%) to believe the library should be able to operate on its current budget. This segment is not willing to increase taxes for library funding." p 48 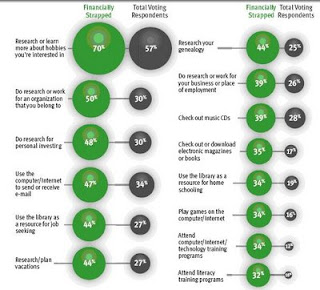 Generally, the Financially Strapped won't pay for extra funding. I can understand that without all the graphs and charts. If you can't make ends meet, you can't afford another dollar no matter WHAT the value is. It's called being nickled and dimed. (I have to say look at that discrepancy near the bottom. That's a 22% difference between those who attend literacy programs and those who would support additional funding.)

DETACHED
"The most defining characteristic of this segment is its members’ lack of involvement with their local public libraries and with their communities as a whole. The Detached segment is the least involved with their library of any voting segment. They use the library less than other segments and do not see its relevance to the community. p 50 " 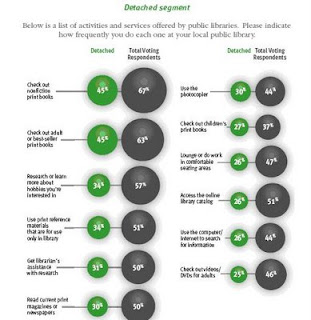 I see this as a problem with a new segment of the population moving in. With the recent housing boom, many communities are seeing many new faces. Have those faces been integrated into the community? A bedroom community could have this problem. A community in which the residents go elsewhere for shopping or other amenities hurt that community as a whole, not just the public library.

"The Detached segment tends to have higher household incomes than average, with 29% having an annual household income of $100,000 or more,compared to 19% of the total voting respondents. p 50 "

This also fits with my community. We have had a housing boom with more white collar households.It has been difficult to engage them or even to get them to shop in town. This is mostly due to them moving to the northern side of town and commuting to work and leaving to go shopping on the weekends.

"Not only are the Detached respondents uninvolved with their local libraries, they are uninvolved with their communities. They pay less attention than average to issues around local politics and the local economy, and are less-frequent consumers of local media. The Detached segment tends to believe that everyone in their communities has Internet access. They fail to recognize the library’s role in providing equal access to technology for community residents.

With higher than average income, the Detached segment is better able to afford an increase in taxes to support public services than many other segments. But lack of connection to or interest in the library and their communities make them unlikely to support tax increases to fund the library.p 50 "

I can understand this. If I don't use it, why should I pay for it? This is the segment that want to lower taxes. Some would say, "I don't want to pay to help the poor or someone else." What if some Library Directors fell into this category?


The Web Wins
The web Wins section is a no brainer. This is the biggest, "Isn't everything on the web?" segment you always hear. Librarians try to get this segment by placing library services online. Sometimes I wonder if some librarians are getting too far into this realm. (As in using the web so much that they don't use their own library.) 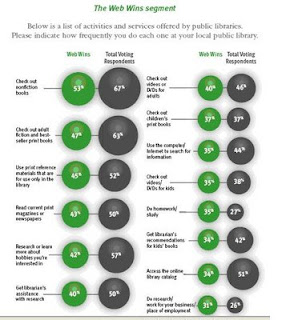 Thanks for the summary, it's a huge document to wade though! I'll be back for the second half